Vlakno is a small cave, with just fifty square meters of living space. It is located in the central area of the island of Dugi Otok, at its narrowest part between the settlements of Luka and Savar. Cave opening is situated 50 meters above the sea level and it faces south-east or sunny side of the island. Cave opening was narrowed in recent past with thick stone walls, leaving only a small entrance. Foreground is also surrounded by stone walls in a square layout. The cave is extremely dry, with fine, dusty soil on top. This layer did not contain any finds and thus prevented easy detection of the site. Based on its outlook, size and orientation the cave must have been suitable for habitation by a small group throughout the year.

Cave layers clearly indicate climate characteristics and environment from the Palaeolithic and Mesolithic times. At the time of the earliest layers of the cave, Zadar and the wider northern Adriatic area show considerable environmental differences in comparison to present time.The sea level was lower by 120 m. Cave was located high above the surrounding area, and the whole island had a form of a high cliff, 100-400 m above the valley. During the periods of low sea levels large area of present-day northern Adriatic wasa river Po valley and its numerous tributaries from the Apennine peninsula, the Alps and the Dinarides. Dugi Otok, along with the Kornati archipelago, and the smaller islands such as Žut, Rava, Zverinac, were all part of amajor landmass, which was connected to the main land via the island of Molat. Ugljan, Pašman, Iž, and their respective areas, were also a part ofthis feature. Deep depression of Vir, as well as greater Pag, Silba and Premuda are as were isolated from the open sea.The region was, most likely, covered with fresh water from Zrmanja river and numerous Velebit springs.
Northern Adriatic valley, which was, for the most part mainland in this period, provided suitable living conditions for the animal herds from the north. This complex environment, with indented coastline, ample marine and freshwater backwaters, streams and other barriers, was ideal for hunting large terrestrial animals that lived in the surrounding area or were in constant migration. Since that time gradual climate warming caused rising of the sea level until the time of the latest Mesolithic layers of the cave, when sea level was about twenty meters below the present-day level. Dugi Otok, along with Kornati and some other neighbouring islands, formed a larger mainland massat that time. Cave was located several meters above the sea level. There was probably a source of fresh water nearby. Nowadays, the bay below the cave is called Šipnatica, which is a common toponym related to water resources, which was one of the essential prerequisites for living in this area.
Since 2004, Vlakno cave was excavated during 15 archaeological seasons, in which we reached the depth of 5 m, with cultural layers that can be traced back to 19,500 years (the lowest layer was dated to 17,530 cal. BC.). It is important to mention that the reached depth is not final. The excavations were halted at this depth due to reduced surface of excavation. Previous project was focused on the layers from the early Mesolithic period, i.e. 10,000 years ago. Finds clearly illustrate the changes that have affected the site and its environment. Ice Age ended and the warming resulted in rising of sea level. A considerable number of marine fauna finds indicate changes in organization of the Mesolithic hunter-gatherer communities and adaptation to new climatic conditions. An increase in marine resources exploitation in the vicinity of the cave is more than apparent. The layers abound with the remains of oysters, molluscs and fish bones. Lithic and bone artefacts and remnants of their production showthe lifestyle of the cave inhabitants.

Exceptional scientific importance of the cave was established as soon as the upper layers were excavated. In addition to numerous finds, includingmany perforated snails that were used as ornaments or parts of a necklace, a human burial was found as well. Almost complete skeleton of one of the inhabitants of the cave was found near the fireplace. Community members have laid him, or maybe even left him at the place of death. The body was covered with some soil and rocks, sufficient to protect the body from wild animals. The skeleton can be dated to the period of 9,500 years ago. There are only a few human remains from this period in Dalmatia. Scattered fragments of skeletons were found in the Kopačina cave on Brač. Layers with the greatest number of human remains were found in Vela spila on the island of Korčula. However, dates for these finds are 1-2,000 years later than the human remains in the Vlakno cave.

Numerous flint tools, as well as flakes, indicate to activities of our distant ancestors in this cave. Mostly they fall into technological categories such as flakes, cores, or blades. The number of tools is small, while retouch is reduced only totool edges. There is a small quantity of bone tools, mostly awls.
Numerous ornaments of perforated snails reveal changes in ornamentation when compared to the Palaeolithic period. Perforated deer teeth are still used, but it is no longer the dominant form of decoration, which indicates the reduced role of hunting in the Mesolithic. Adriatic population, with the increase of sea level, turned to fishing and collecting seafood as subsistence base. It also changed the production of jewellery, now using molluscs collected along the coast.

Below the Mesolithic layers are the Upper Palaeolithic layers. There appears to be no hiatus, which makes the Vlakno cave one of the rare sites where scientists can track the transition from Palaeolithic to Mesolithic, a period poorly known in the eastern Adriatic. At depth of approximately 200 cm below surface, there is a layer of tephra. It is a 5 cm thick layer of yellow Neapolitan tuff ejected during the eruption at the Phlegraean fields near Naples. Eruption that created the tephra layer in the Vlakno cave occurred 14,900 years ago and is certainly an important chronological marker, not only for dating cave phases. It is a suitable chronological marker for correction of other absolute dating methods, especially radiocarbon 14C.
Above and below the tephra layerthere are layers separated by numerous interlayers of ash and burnt soil, which actually represent use surfaces from the period when the cave was inhabited. Artefact analysis hints at the Epigravettian period, corresponding to the general development of the Upper Palaeolithic on both sides of the Adriatic. There are only a few sites from that period in Croatia, the most famous being Šandalja II where I. Karavanić proved the existence of two different time phases of the eastern Adriatic Epigravettian, which can be distinguished by typological and technological characteristics. Vela spila on the island of Korčula with thick layers abounding in archaeological material,exhibits most similarities with the Vlakno cave. The Pupićina cave corresponds to the second stage of the Epigravettian and Vešanska peć contains the Epigravettian lithic industry dated between 13,400 and 11,230 cal. BC. We have a similar situation with Nugljanska peć.

All epigravettian layers contained a great number of finds. The Palaeolithic layersalone contained thousands of flakes, and a few hundred flint tools. The largest number of artefacts was made of local chert and radiolarite, which can be found even today in the bays of the island. The tools are usually made on blades and bladelets, with a large number of backed bladelets.
Numerous bones of large terrestrial animals such as deer (Cervus elaphus) indicate that during the Upper Palaeolithic, hunting was the main source of food for inhabitants of the cave. There are also fish bones, but in far smaller quantity than in the upper layers, where marine resources became most important with the increase of the sea level.
Most artefacts are of purely utilitarian character, and only a small part can be related to the domain of aesthetics, and perhaps in the broadest sense of the word, in the domain of art. More then 20 specimens of bone awls were found, most of which in the layer directly below the tephra. Although these are utilitarian pieces, the two specimens have parallel grooves. These were not a result of use wear, but purpose fully applied as decoration. Perhaps there were other motives for this action, but data leaves no ground for speculation at this time. 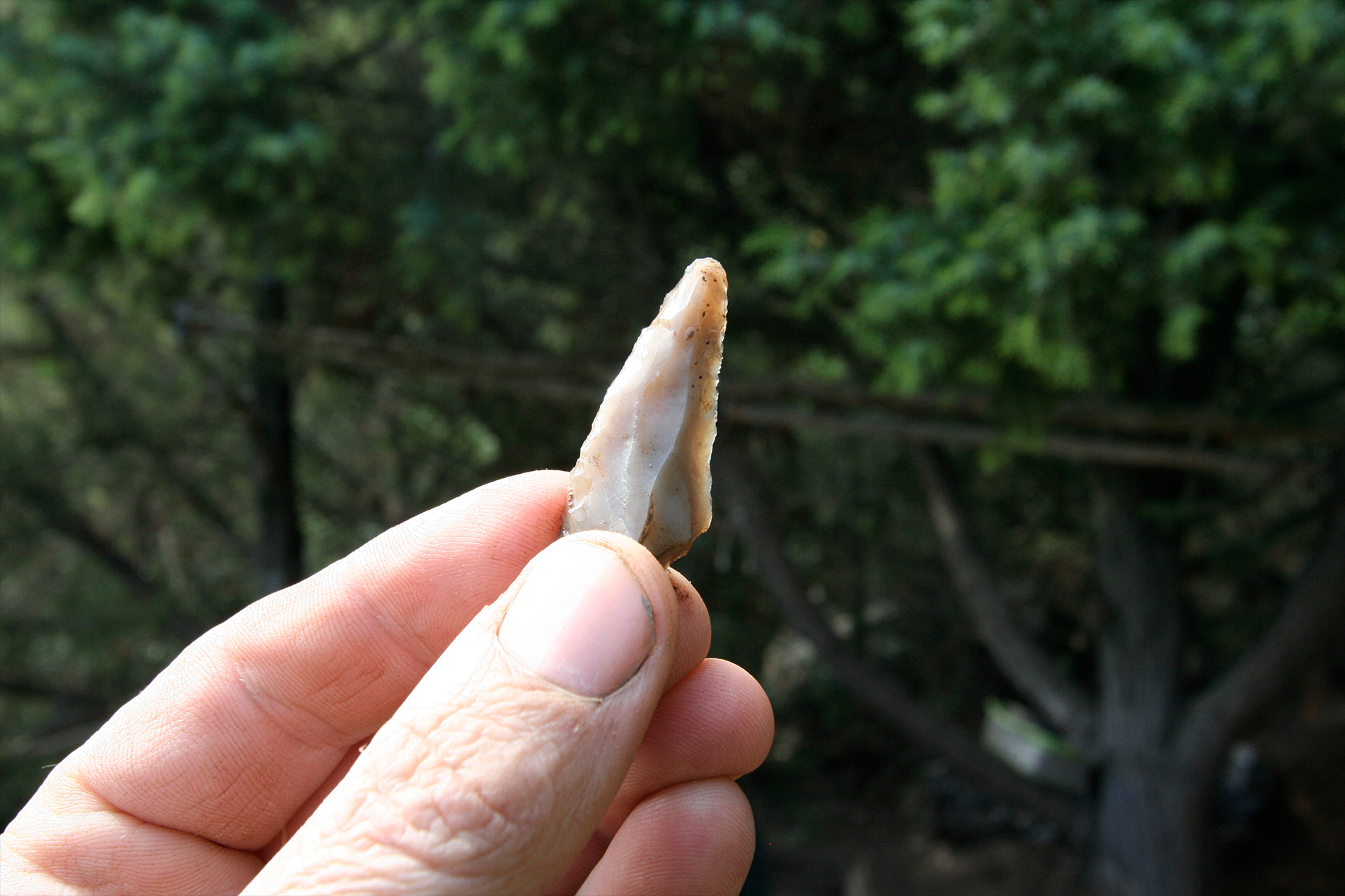 Along with the standard archaeological assemblage, which can be found among numerous sites of this period, Vlakno cave also features a large number of finds that are rarely found. The appearance of a large number of ornaments, such as perforated deer teeth, shells, or snails, or those of bone , makes Vlakno cave one of the richest sites on the eastern Adriatic coast, especially when considering that the surface area is smaller than other sites. While in the Mesolithic layers the perforated molluscs represent the main form of decoration, perforated deer teeth (Cervus elaphus) dominate in this category of finds as well as perforated shells (genus Glycimeris). Among the numerous found artefacts two fragments of engraved chert nodules in the layer dated to 12,710 to 12,120 cal. BC (14,660 to 14,060 BP) especially emphasize. The attention of the scientific and professional public was particularly motivated by the finding of the anthropomorphic pendant. This artefact is the first depiction of human form created in the Palaeolithic to be found in Croatia.